Remnants from Regions Beyond 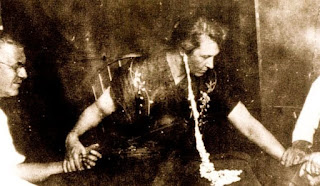 The medium and the sitters gather in a circle at a small table. The medium, in a deep trance, tilts her head to the side and a white substance starts to seep from her nose and ear and starts to take a life of its own as it floats nearby the medium’s head. The other sitters in the room try to peer through the near-darkness to grasp the true shape of the form drifting before them. In other instances, sitters will claim to see faces in the floating gelatinous material. The medium, will come awake with a start and the lights will be brought up and the white slimy substance is gone and another medium makes paranormal history with the manifestation of ectoplasm. 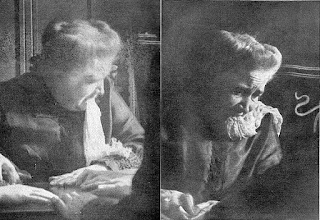 I recently had a very interesting conversation with a dear friend about seances and the history of the phenomena associated with them. Then the subject came to ectoplasm. The history of when it was first experienced if it was even real. I have found the history of it as slippery as the substance itself. Many believe that the person who first discovered the phenomena was Thomas Vaughn, a 17th Century alchemist, but the first person to describe ectoplasm is Emmanuel Swedenborg who wrote:
“…a kind of vapour steaming from the pores of my body. It was a most visible watery vapour and fell downwards to the ground upon the carpet.”
But it will not be until 1884 will the term for the phenomena be called ectoplasm from Charles Richet, a physiologist and psychical explorer. He used the Greek words ektos which means outside and plasma meaning something formed or molded. The best definition that I could find was this:
a supernatural viscous substance that is supposed to exude from the body of a medium during a spiritualistic trance and form the material for the manifestation of spirits. 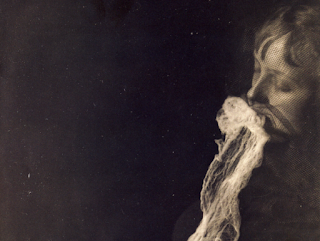 Arthur Conan Doyle, famed author of Sherlock Holmes and ardent Spiritualist defined it as:
"a viscous, gelatinous substance which appeared to differ from every known form of matter in that it could solidify and be used for material purposes".
And unlike the popular feelings of ectoplasm from movies such as Ghostbusters, it isn’t a residue left behind by the spirits. No one “gets slimed”. It is, if it truly even exists, supposedly a fluid like substance that comes from the medium and can supposedly pick up small objects, form hands and faces and may even interact with the medium or the other sitters. A pop refence that comes to mind is the extraterrestrials from the James Cameron movie The Abyss. I even found a contemporary source that states that ectoplasm formed a complete woman and that the woman could communicate via writing and that the same “manifestation” left an impression of her hand in paraffin for the sitters.
Now, you hear the examples of this phenomena and it sounds fantastical and I long to see it immediately. Then you see the pictures…Oh boy.
To say they are hokey is an understatement. I have never found a photo that portrayed ectoplasmic manifestations and not notice the effect allegedly displayed as amateur at best. If it looks like cheesecloth with a glove on the end, then guess what…it most likely is. A face made a of paper mache? Obvious. I have even seen pictures with realistic faces on them and then when the picture is blown up you noticed it’s a page from a magazine. Many mediums who claimed that they could manifest this phenomena and had photographic proof were brought to heel. Mediums were searched before the seances which made some mediums very clever in where they hid the cloth. I’ll leave THAT to your imagination. 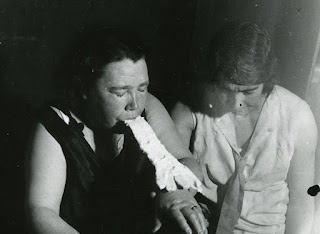 A common theory out there was that real ectoplasm needed to be photographed with infrared film because of the sensitivity of the manifestation itself. Mediums claimed that ectoplasm was sensitive to light and would disappear rapidly back into the medium if the lights were turned on. I researched the history of infrared film and yes, it was available at the turn of the century and was even more readily available by the 1930s BUT this type of film required even longer exposure times than normal film and so capturing an image would be extremely difficult considering the objects fluid-like state. And has anyone seen an infrared image of ectoplasm?
I do not completely dismiss ectoplasm, some of the earlier sources seemed very certain in its authenticity and so warrants further investigation as to its existence and how it is truly manifested. Sadly, the charlatans of the day tarnished it but we must always pursue the truth. No matter where it goes and what it reveals.