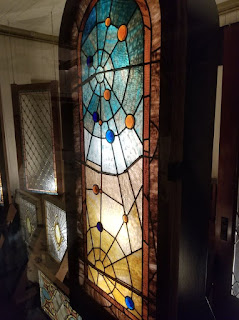 I spent this last week working in the Bay area teaching and so I put my free time to good use, by exploring the (in)famous Winchester Mystery House. As both a lover of history and historical preservation and being a paranormal investigator I should be pleased as punch to be at this iconic site. Arriving early in the afternoon with reservations for tours during the week, I assumed that the place would be quiet, but I found that the place was still a bit busy, probably due to the Halloween season. The gift shop packed to the gills with everything from tee shirts and mugs to shot glasses that look like shotgun shells. And of course, shirts and hoodies etc. with advertisements for their night time haunt Unhinged. Now I am a Capitalist to the core…but this is Ridiculous!!! I have never seen so much merchandise dedicated to a single monument.
I will say that the Halloween section that they set up was interesting in the gift shop. My favorite piece though by far was the elaborate Gingerbread House that they made of the Winchester House. It was extremely detailed with all the beautiful accents that made the house famous. What made it even better is that they have it displayed in a darkened room and the house is lit up. Until you get to the room with the crystal ball on a table. Sigh. You had your chance to be elegant, and then you blew it.

This an excellent time for me to step back and tell you just what do I think of the Winchester Mystery House. The house itself, if you were to rip down the “spiritualism facade” and simply enjoy the house for what it is, a mansion created from a half-built farmhouse by a woman who was driven by grief. If you look at as that and only that, you might actually enjoy the house. But sadly you have to pay goodly amounts of money to be dragged on to a tour and spieled to by a guide that has probably done his third tour for the day, is tired and weary and is parroting something that he was fed from day one that is speculative at best and historical heresy at worst.
As I was brought through the home on my tour with eight others, I was impressed by the guides opening and the small film about the Winchester family history that was portrayed on the art glass windows. But even more so, I was taken back by their collection of Lincrusta Walton wallpaper still in rolls along with a display of the various patterns shown throughout the house. I feel like I can gush just about this, but I’ll refrain. Lincrusta should have its own post. In essence though its embossed wallpaper, and the house is heavily decorated with it. With the amounts of Lincrusta, decorative art glass and rich dark woods, the mansion is a testament to Victorian architecture. The odd twists and turns and misshaped rooms are a reminder of her grief and possibly her mental illness.
The Winchester Mystery House owners like to tell a story of a lonely widow, mourning the loss of her husband and child moves from the East Coast under the advice of a psychic medium who told her that she was “cursed” by those killed by the famous Winchester rifle. And that she fled out west to build a home that must constantly stay under construction, in order to thwart the spirits that haunted her. They also state that she was an avid spiritualist and held seances nightly in a room where spirits would come and commune with her and give her instructions on how to build the house. All, I can say to this is that its highly unlikely that the history that the current owners shove into our faces is accurate at all. 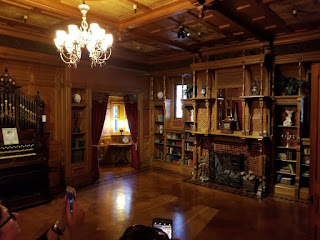 What I CAN say is that Sarah Winchester’s closest friend, Henrietta Severs, claimed that Sarah was neither a spiritualist and didn’t conduct seances in the house. When I took the tour, our guide was very clever and used the phrase, “it is believed”…a lot. When you say that many times over, you start to interpret the phrase as a positive reinforcer. Very smart of them indeed. By the time you come into the simple tiled and wood paneled room, the guide can simply say “and this is where she conducted nightly seances”. Hook, line and sinker. Where did the stories come from? Well stories circulated about Sarah while she was alive. The eccentric heir in her gilded mansion of madness. I’d probably be concocting some stories of my own if I was alive back then. But after her death, the home was taken over by the Brown family and they come from the amusement park and carnival industry and they knew how to sell tickets. They started giving tours of the house months after Sarah’s passing. It was the Brown’s who started the story of Sarah’s obsession with the number thirteen. The thirteen hooks, the candelabra with thirteen lights. These were all installed after her death. It was them that got the ball rolling about seances and other spiritualist activities at the house. The story of her doing solo seances at midnight is honestly absurd. Anyone who truly pursues the history of the Spiritualist movement of the Victorian era should know that seances are a social thing. Home circles they were called. They required several people and it was very ritualistic in nature with one person usually acting as the medium and the others acting as a conduit to assist them. No one person would conduct a séance.

I do believe though that Sarah Winchester was a genius in her own right. There is a method to her madness that I’m sure that only some could truly appreciate. There are possible ties to Freemasonry and Rosicrucianism in her designs (the Rosicrucian’s had a had a strong hold in the San Jose community at the turn of the century) and her tips of the hat to Shakespeare and Francis Bacon.
If Sarah Winchester truly felt that she was cursed by the spirits killed by the Winchester rifle, then why would she continue to cash in on the residual income she gained from the sales of this weapon. Hypocrisy? Or simply the roots of a ghost story waiting to happen.
Now comes the big question. Do I think the Winchester House is haunted? Perhaps. The history and the accidents that must have occurred as well as the ties that objects may have that were brought into the house. Is the house haunted by those killed by the rifle? To me that seems a very hard pill to swallow as much as I try. I want to believe that the house is haunted. A majestic house such at that deserves a good ghost or two.

Oh, and did I see the movie? The movie they sell in the gift shop and have a whole section of the house dedicated to it? Yes, I saw it. I’m a horror fan through and through. What did I think of it though? I want my $2.50 and my two hours back. It isn’t good, even as a schlocky horror movie.
Soooooo….should you visit the Winchester House? Yes, its and architectural marvel that is worth seeing on its own. Just take the tour with a grain of salt and enjoy the view. Tour the grounds and maybe have a snack in their café. Just remember, it isn’t the “House that Fear Built” as they once sold it. It’s a legacy left to us by a grieving widow with money and time on her hands.