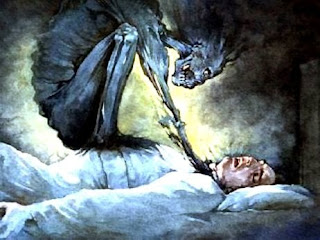 The Night hag or the Old Hag as it is sometimes called is a tale as old as time itself and permeates through many cultures. It is to many the source of our bad dreams but more importantly, it is the supposed source behind sleep paralysis.
It is the phenomenon in which people report waking in the middle of the night and unable to move as if someone is holding them down or in some cases even sitting on their chest.
The original definition of sleep paralysis was first described by Samuel Johnson in his A Dictionary of the English Language as nightmare, a term that we use today to describe any bad dream. This sensation was believed to be malevolent in nature as it is the work of evil spirits or demons that are sitting on the chest or on the feet of the victim. Certain sources state that the Old English word for these creatures was maere or mare. And since these attacks happened at night, it makes complete sense for the term nightmare to permeate our culture the way it has. 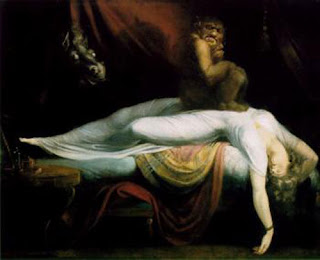 And not just OUR culture. On every continent, and in every faith, there is such a story. From the frozen lands of the North to the steaming jungles of Southeast Asia, there is a hag. From Christian, to Buddhist, to Muslim, there is the hag. In Europe, where many of our ideas of the supernatural come from in the Western world, the hag is almost always a malevolent spirit or a witch which causes us to not be able to wake but shudder in helpless fear. I find it interesting though how some cultures in Europe, as well as Asia, see the hag as an animal. In Catalonia, for example, the creature is called a Pesanta and could be either a dog or a cat that suffocates his victims with his weight. In Turkey, as well as other Muslim cultures, the sleep paralysis is brought about by an evil Jinn, or demon.
This brings about another folktale which I find fascinating. Can cats suck the breath out of babies? Cats have been blamed for many things over the centuries. In 1233, Pope Gregory IX decreed black cats were the devil’s familiars which lead many of them to be rounded up and killed in hopes of keeping the devil at bay. And many stories circulated of a cat snuffing out the life of a small babe by lying on its chest and sucking out its breath. Is there any truth to this? No. In hindsight, this is simply a family’s worst nightmare, SIDS or Sudden Infant Death Syndrome, and the cat once again takes the brunt of the blame. 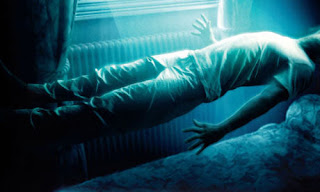 As our minds turn more technological and we look toward science to explain our nightmares, we lose our fear of the dark. No, not really. We simply exchange one belief for another. It is one of the ironies I have observed over the years dealing with the paranormal. I have come across people who say, “UFOs are real, but ghosts aren’t.” This versus that. You get the idea. This phenomena which we call the Hag or Nightmares has become a common theme in alien abduction. The supposed victim’s inability to move while unseen forces oppress them or take them away while they are unable to move or resist. The scenario is far too similar to be ignored and must be looked at objectively.
Sleep tight, everyone. The Hag comes soon enough for us all.
Newer Posts Older Posts Home