Into the Belly of the Beast 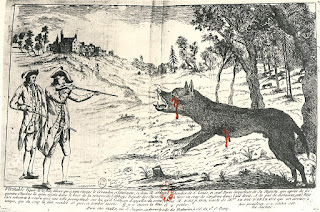 The year was 1764, a hard year for France. It had just lost the Seven Years War, which ended in 1763 with the Treaty of Paris, the King was deep in debt, and a horrific monster stalked the countryside of Southern France.
The first attack will be in the summer of 1764 when a young woman by the name of Marie Jeanne Valet ran into town claiming she was attacked by a massive creature. The only thing saving her were the cattle she was herding. The bulls in the herd attacked the beast, defending the herd, not once but twice. Marie claimed that it was a large creature, perhaps a wolf, larger than she had ever seen, and fierce enough to want to attack large cattle more than once. The Beast of Gevaudan was born.
Wolf attacks are uncommon now, but back then they were common and very deadly. Naturalists and biologists agree that almost all wolf attacks today are the result of an injured or starved animal, drifting from its instincts to attack a human that it perceives as weak. And wolves are pack animals, a solitary wolf on the hunt is extremely rare and a lone wolf is dangerous, because it has been cast out of the pack. As Rudyard Kipling noted in his novel, The Jungle Book, “The strength of the pack is the wolf, the strength of the wolf is the pack”. A solitary wolf is far from natural. To have one running around the countryside struck fear in the 18th Century farmers of Gevaudan.
The first victim though to be killed will be a 14-year-old Jeanne Boulet, who was attacked while tending to sheep under her care. Her death will be the first of many for the remainder of 1764. The remains of the victims were ghastly. The throat was always ripped out, sometimes completely decapitating the victim. Bodies ripped to pieces. The amount of people killed was staggering. The prey of this elusive and savage creature were always women or children attending their crops or animals. As I mentioned earlier, wolf attacks during this time was not uncommon but not this many, in an area which was only about 55 square miles. The description of the creature varied from the survivors, from the color of its fur, described as dark in color with a red strip, an unusual tail ending in a tuft and a white heart shape marking on its chest. The large shape and unusual coloring of the creature led many in the area to believe the creature was supernatural, a Loup-garou, or werewolf. Though horrific, it would have been ignored by the Royals of France, if it wasn’t for the press.
Newspapers at the time were all the rage. They contained all the gossip and current events of the world as you knew it in just a few pages. And it was under the eyes of the government. Due to the loss of the Seven Years War, the King was rather strapped for cash, and the last thing he needed was newspapers writing of the financial crisis and the humiliation the King suffered under Prussia and Britain. The King forbade any derogatory reporting on governing bodies, forcing the newspapers to focus their poisoned pens on something else, and the Beast was exactly what they needed. And in January, 1765, when eight young men were attacked and only survived by staying together as a group, the King took notice, and so did the newspapers. The King gave 650 livres to one of the young men and then decreed that the Beast would be hunted down by the State.
French Dragoons were sent in to protect villagers and to hunt the Beast. There were many unorthodox tactics used in trying to snare it. Some soldiers dressed as women, hoping that the creature would see them as a potential target. Other times, when human remains were discovered, they would poison the body, hoping the creature would return to feast some more on its victim. Several hunters of renown came to Gevaudan, and they all failed. Many wolves were killed, but nothing matching the description of the Beast. 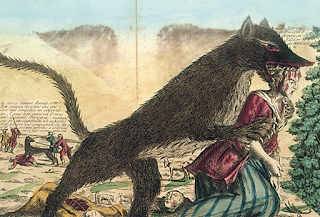 In September 1765, Francois Antoine, one of the King’s hunters shot a large gray wolf using a large caliber musket. The wolf was over 5 and a half feet long and weighed over 130 lbs. Antoine wrote to the King, “"We declare by the present report signed from our hand, we never saw a big wolf that could be compared to this one. Hence, we believe this could be the fearsome beast that caused so much damage." The beast was stuffed and sent to Versailles and Antoine stayed in the area to hunt what he believed was the Beast’s mate and pups. He succeeded in killing both and went back to the King’s court where he received a large sum of money for his valiant work and the fame of killing the Beast of Gevaudan. Unless of course, he hadn’t.
Two months later, attacks continued, this only added to the supernatural aspect of the creature. Starting with two young boys who barely escaped. Once again, the body count stacked up, and in 18 months up to 35 were slaughtered. Finally, the creature was brought down by a local farmer named Jean Chastel using a musket and a combination of bullet and buckshot, of course made of silver. A traditionalist to the core. The creature was then sent to Versailles. The King and his court were not impressed. What arrived was a stinking mess, wet from its travel to the palace and decomposing poorly. After this, no more victims littered the countryside…well, no more than usual.
So, what really was the Beast? There is much speculation on the subject. A large rogue wolf? A mastiff? A National Geographic article on the subject believes it may have even been a young lion. I know this may sound absurd but during the 18th Century, nobles had menageries and private zoos and one may have escaped and judging by the description by some of the victims, completely plausible. One expert on the event believes it may simply be a pack of large wolves working together. Either way, the Beast of Gevaudan went down in the annals of history as a supernatural beast of terrifying power and ferocity, and if its descriptions are to be believed, was never really caught.
Newer Post Older Post Home