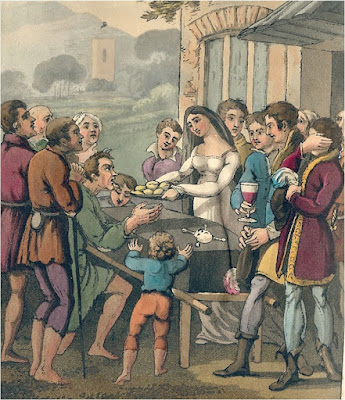 The table is set, the food is plentiful and the wine is indeed fine. You don’t mind that your only companion for the meal is a corpse, after all it is them that you came to see, for you are a sin-eater.
The history of the sin-eater is a mysterious one. Some sources claim that it goes back to the 17th Century in England and Wales, but of course other cultures participate in similar rites as well that go back even further. The ritual of bringing in a sin-eater was against Church doctrine at the time yet it still happened in many communities.
The ritual was viewed as very solemn. A sin-eater would be called for and brought before the corpse, where a ceremonial meal had been laid out, and sometimes the meal would be placed upon the chest of the shrouded corpse. The meal would then be consumed by the person, taking on their sins, and allowing them to go to Heaven unburdened. The purpose of bringing in a sin-eater was also to help release the soul and so it would not be trapped on earth as a ghost or spirit. The consequence of this upon the sin-eater would be dire, for it almost guaranteed them damnation for consuming so many sins over their lifetime. Because of the spiritual burden placed upon these unlucky souls, they were usually ostracized by normal society and lived on the outskirts of town. Even looking a sin-eater in the eyes was considered a curse you placed upon yourself.
This unusual occupation went well into the 19th Century. With the mass migration of the English and the Welsh in the 17th and 18th Century to America, the story of the sin-eater settled into the rural parts of the colonies, mainly the Appalachian area.
The last known sin-eater in England was Richard Munslow who died in 1906. What made Munslow unique was that usually the sin-eater was an outcast of society while Munslow was a respected farmer in the community. It is believed that he took on the job after four of his children died at an early age, including three of them who died in one week of scarlet fever in May, 1870. He felt that he was a man with nothing, and a man with nothing has nothing to lose. Why not take on the sins of a community? His grave is still well visited today and he goes down in the annals of history as the last sin-eater in England. But was he? I find it hard to believe that such a need would be gone in so quick a time. There are the random stories of mysterious strangers being paid to dine with the dead till this day.