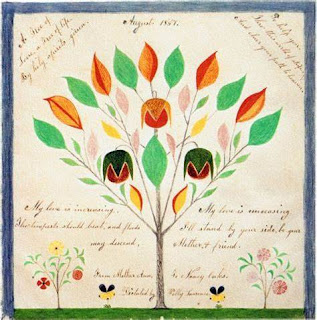 When one thinks of the Spiritualist movement in the early days, they usually think of the Fox Sisters or David Hume. If they are wanting to go even more obscure, they might even think of Swedenborg or Mesmer. But many misses one of the most important early influences, the Shakers. This is usually when someone says, “the furniture guys?” Yes, them. Known throughout the world for their fine craftsmanship and artistic skill, the Shaker community also helped set the stage for American Spiritualism.

First off before we delve deeper, people sometimes confuse Shakers with Quakers. They are two completely different animals, though one of the main founders of the Shaker religion, Mother Ann Lee, was formerly a Quaker, and brought to her new faith some key principles of her former sect, including: simplicity, financial responsibility, work ethic, and the belief in the perfectibility of humankind. That is where their similarities end.

The Shakers started up in the mid-1700s in England and quickly made their way to the colonies. They were originally called the Shaking Quakers because of their ecstatic behavior during their worship services. The Shakers were one of the first egalitarian faiths, stressing an emphasis on equality for all, which included women leading in church positions, something unheard of at the time. In fact, three of their primary founders are women. Mother Ann Lee, who I mentioned briefly above, Jane Wardley and Lucy Wright. Officially, the church was called The United Society of Believers of Christ’s Second Appearing. But they took on the name Shakers wholeheartedly and sailed from Liverpool in 1774 and traveled to New York with a small retinue of fellow believers and by the beginning of the American Revolution were settled in Watervilet, NY. 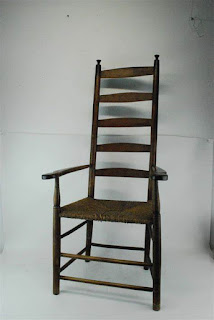 Sadly though, they would not swear an Oath of Allegiance and so were imprisoned for six months. This actually garnered sympathy for their beliefs by the local community and Mother Ann and the others went on a campaign shortly after sharing their new faith throughout the northern colonies.  Ann Lee was thought of as the Second coming of Christ in female form, and attracted many to their ranks. By the 1790s, they had several communities in the area and their new main headquarters was New Lebanon, New York. By the beginnings of the 1800s, Shaker missionaries were making their way to the southern states. The Shaker faith attempted a utopian style community based on hard work, strong ethics, and celibacy. Shaker communities separated men and women and sexual relations were forbidden. The only way children came into the community is if a woman was pregnant and then became a Shaker or the child was an orphan brought into the community. At the age of 21, children could officially join the community full time as a member of the faith, or go out into the world.

The Shaker religion really had its height from the 1820s to the 1860s, which puts it right into the beginning of American Spiritualism. It was known to the Shakers as the Era of Manifestations, alluding to the revelations of one of the founders, Mother Ann Lee. This was a time of what they called “spirit gifts” or messages. These would usually be in the form of dervish style dances and the young women bringing back messages from the now passed Mother Ann Lee or others from the spirit world. Or other times the “gifts” would manifest into beautiful pieces of art such as paintings known as “gift drawings”. Sometimes these messages from the Otherside didn’t go so well.  The messages might lead to a new order to their faith that would cause dissention. Some of the young women delivering these messages had minor celebrity status and were sought out by others in hopes of receiving a message from someone who has departed or from Mother Ann herself. In 1842, due to the huge amounts of messages allegedly being received, the Shakers barred the public from attending Shaker services.  Other revelations resulted in the publishing of an esoteric tome by Philemon Stewart, A Holy, Sacred and Divine Roll and Book. It was also during this time that the Shakers become known for their wonderful furniture making skill 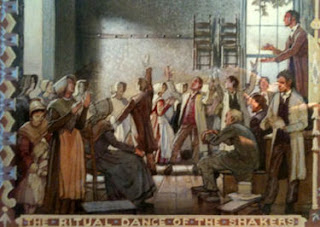 The Civil War era was an interesting time for the Shakers for they were pacifists and even though they believed in many of the philosophies of the Union, such as the abolition of slavery, they housed and fed soldiers of both sides. President Lincoln exempted Shaker males from military service. After the war, the Shakers suffered from the postwar economy and could not compete with the industrialization of the world. Their numbers suffered tremendously and many left the faith. By the turn of the century, the faith was dying out and sadly all but dead. The communities they set up are dust and today the Shakers themselves are almost gone. Small communities still exist, but they are few and far between.

The Shaker faith brought many things to the New World. An artistic esthetic that is sought after even today and often imitated. But it also brought the beginnings of Spiritualism to the colonies in the form of communications from beyond the veil. Years before the Fox sisters came upon the scene, there were these women who saw themselves equal to their male counterparts, and they had a message to share with the world.