The Night That Changed Houdini’s Life 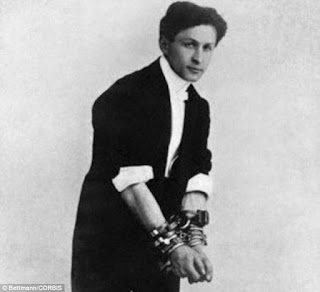 Harry Houdini was the greatest escape artist at the time and perhaps better than the world will ever know. From the moment he became the “King of Cuffs” and then a friend in 1896 introduced him to something at a psychiatric hospital, a strait jacket. Harry Houdini from then on just didn’t master the art of magic but the art of the escape, his fame was guaranteed.  There wasn’t a prison that could hold him or a shackle that could confine him, but one night in October, 1902, he felt very scared and very mortal. Houdini was in Great Britain, performing at Blackburn’s Palace Theatre. There was a prize, £ 25 for cuffs that would hold Houdini and prevent his escape. Harry had been there all week and no one had produced a device that could hold him.

A large man approached the stage, a voice elegant yet deep, his athletic frame barely contained in the suit he wore. His name was William Hope Hodgson, born in Essex in 1877. William became a cabin boy in 1890 and was constantly harassed by the other crew members on the ships he worked due to his small size. He took up body building as a means of self defense and worked the seas until he made enough money to set up a gymnasium for body building and weight training. Houdini, a man who lives on the razor’s edge, looked at Hodgson like he would anyone else, an easy mark. Then Hodgson made his move. He slapped some unusual cuffs on Harry and trussed him up very professionally and crossed his bulky arms in satisfaction. Houdini was in trouble. The cuffs were different in design and Hodgson clamped them down so hard that after thirty minutes, Houdini asked for them to be removed so he could get some feeling back in his hands. A doctor, hired by the theatre, agreed to the idea but Hodgson refused. It wasn’t about the money; it was about the prestige. The audience must have become uneasy watching Hodgson gloat over Houdini’s predicament. The police finally came and urged Hodgson to leave. After about another hour, Harry finally freed himself and came out behind his curtain, sweating profusely. It was about midnight when the audience finally left the theatre. 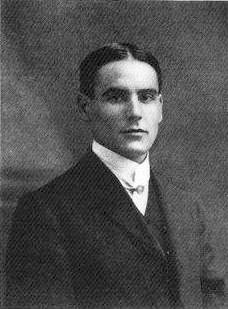 There were rumors about Harry’s brother helping him escape or perhaps it was a publicity stunt prearranged by Houdini, no one will ever know. Houdini did say that it may have been the toughest escape he had ever performed.

What happened to William Hope Hodgson? He actually mellowed out a bit and became a fiction author, specializing in gothic horror. In 1908, he wrote a novel called The House on the Borderland and it was a tremendous success for its genre. HP Lovecraft admitted that he used it as inspiration for several of his stories. Lovecraft will later work with Houdini on a short story that will run in Weird Tales entitled Imprisoned with the Pharaohs, and was working with Houdini on a book on skeptical thinking when the  magician passed on October 31st, 1926.

Hodgson himself met a different fate and died a hero. He became an artillery officer during the First World War and was killed on April 17th 1918 near Ypres, Belgium.

Harry Houdini will later go on to perform dangerous escapes throughout the world, but he will never forget the night William Hope Hodgson came into his life and made the greatest magician that ever lived do something he never thought possible, doubt.