I Will Create as I Speak 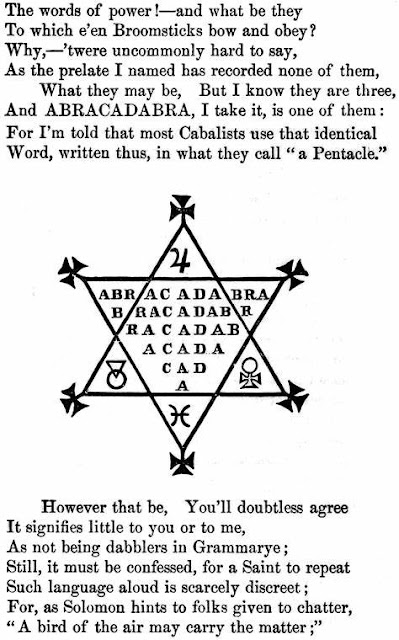 How old is the practice of magic? Truly ancient, if you look at the writings of the Egyptians, Greeks, and others. Everything from cups and balls to true miracles such as levitation, healing, and even raising from the dead. And with every one of those feats, there are words. I’m not talking about patter or other nonsense. I’m talking about real words that contain true power. And as cheesy as it may seem, one of the most powerful words is indeed Abracadabra. And there you are, snickering away. When you think of the word you think of magicians pulling rabbits out of hats or some such, but what if the word was much older, more sacred, than you ever imagined?

The first time the word is recorded is in the Second Century works of a Roman tutor and politician by the name of Serenus Sammonicus. Written in Sammonicus’ text, the Liber Medicinalis, who describes the word to is to be inscribed in an amulet and worn to ward off malaria. But the term itself is much older than that. The term is linked to the ancient Semitic languages. In Hebrew, the term is roughly translated as, “I will create as I speak” and in Aramaic, “I create like the word”. This phrase makes me think of John 1:1 from the New Testament, "In the beginning was the Word, and the Word was with God, and the Word was God." This piece of scripture is referring to Jesus being at the beginning of creation as well as his time of earth, in which Jesus is referred to as the Word. The word Abracadabra seems to carry power with it as well. The writing of it in magical incantations was done for centuries throughout the Middle East and Europe. Increase Mather, father of Cotton Mather, condemned the use of the word as a talisman as well as Daniel Dafoe, writer of Robinson Crusoe, chided people for writing the word on their doorways as a preventive measure to ward of sickness during The Great Plague of London in 1665-1666.

I still see the word written in its magical form on amulets today as well as read about it many of my esoteric texts of the occult arts. What began as an incantation of ancient knowledge very slowly became dismissed during the Enlightenment then reappearing in the mid-18th Century by magicians as a climax for tricks. I recently did a show where I asked a young lady to be a volunteer. As I handed her my wand, I asked her to speak the “magic words”. What did she say out of instinct? Abracadabra. Well done, young Miss. “I will create as I speak”.