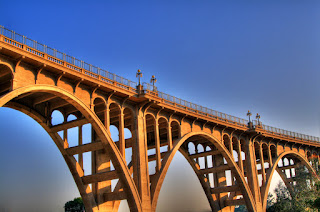 As I branch out of my usual norm of territory and start looking at unique locales to write and share about, I sometimes forget about places that are in our own backyard. Locations that are filled with unusual history, mystery and of course, the macabre. If one travels to LA, you may find yourself traveling through Pasadena, an old community with a flair for fine food, fantastic shopping, and of course the Rose Parade and Bowl game. But there is a darkness that surrounds this city, and that darkness comes in the form of a bridge. Not just any bridge, but a magnificent structure built in 1913 at the Princely sum of $235,000 and stretches almost 1,500 feet across the Arroyo Seco. It is a beautiful expanse of concrete and steel and speaks of a time long ago when architecture was both functional and aesthetically pleasing. But over the decades, it has acquired a different reputation, and a nickname, “Suicide Bridge”. The first suicide was Smith Osgood, a seventy-year-old resident of Huntington Park. Before leaping to his death, he slipped a note to a passerby that read 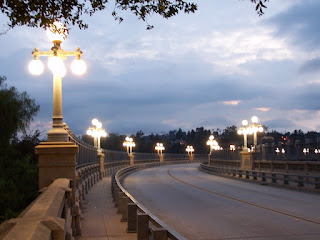 “Please telephone at once GG Wheat, undertaker, Huntington Park, to send for my body and prepare for its cremation. I am about to make the leap from your beautiful Colorado Street bridge. Farewell, beautiful Pasadena! I Loved you so well!”

By 1929, the Colorado Street was being called its new infamous moniker when its 25th victim, Mrs. Bessie G. Hayes jumped to her death. This was the year the city started looking at the issue of the suicides and even contemplated putting in nets to catch potential jumpers, but no action was taken. The turn of the decade and the Great Depression simply amplified the amounts of deaths. In 1933, there were nine jumpers, followed by ten in 1934. In 1935, there were 12. The cross section of people that took their life varied and people from all walks of life came to the Arroyo Seco to end it all. In all, it was believed that 79 people used the Colorado Street Bridge in the 1930s. Up to date, we are looking at around 150 suicides since its construction. 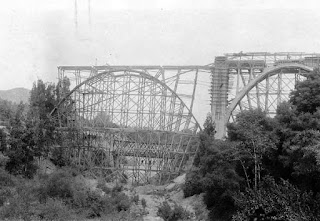 So why do people seek out this bridge, or any bridge for that matter? The finality of it all comes to mind. The commitment taken from the moment the feet leave the concrete. Is not that same commitment made with the pulling of a trigger or some other nefarious means? Is there something “romantic” in the lure of jumping off of a bridge such as the Colorado? Of course, somewhere along the line, someone had to attach a suicide story dating back to the 1890s in which a young Mexican girl leapt off into the canyon, thus creating a story not unlike that of a siren, luring people to this final destination. Another ghostly legend attributed to the bridge was during its construction, a worker fell from the bridge into a vat of cement and could not be rescued and so this hapless worker became the first victim of the concrete and steel expanse. That, though, is not entirely true. Charles Johnson, along with another worker, John Visco, fell when scaffolding they were on collapsed. Johnson, who fell into the vat of wet concrete was injured, but survived. Visco, sadly fell to his death and landed in the creek bed below. 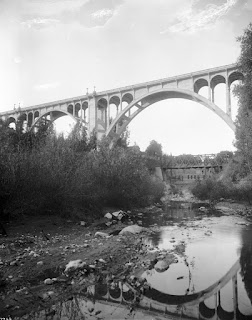 Is the famous bridge indeed haunted? Possibly, but just like any location that is linked with such notoriety, it carries its stories of specters as well. I spoke to one author who writes paranormal fiction and he commented of the intense energy that the bridge has underneath it due to the number of suicides. Another paranormal group wrote on their blog of recording EVPs of children talking and that of a woman whispering, “I’m sorry”, underneath the bridge and even stories of spectral buggies spotted in the canyon below. I myself has walked the bridge many times and can tell you that there is indeed something…interesting about the bridge. Several spirits have been reported walking the bridge, including a young man with wire rimmed glasses and a woman in flowing robes. These tales bring paranormal investigators from all over the Southern California area in hopes of gathering potential evidence for their files.

As a final footnote, I wanted to share some statistics that you may find interesting before you become too awed with the amount of death surrounding the famous Pasadena landmark. My home town of San Diego has the famous Coronado bridge which spans the San Diego Bay. It was constructed in 1969 and has had over 400 jumpers. The Golden Gate Bridge, which was finished in 1937, has had over 1,600 suicides. The Prince Edward Viaduct in Toronto, Canada, built in 1918 has had over 500. Pasadena may feel that they have a dark spot in history, but they are not alone, nor are they truly very special.