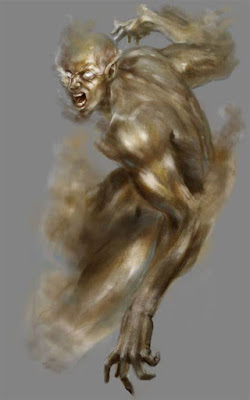 I would like to take a moment, my dear friends, to talk about the Jinn. I had the honor of doing a lecture at Chapman University a couple years back on the subject but I believe it is worth revisiting due to its immense subject matter, as well as it is a great platform for me to address how the rest of the world looks at the paranormal in general.

Jinn are best known as an Arab or Islamic phenomenon even though it predates Islam by hundreds of years. The jinn is a spirit creature, not a ghost, and can possess great power. According to ancient beliefs, jinn are created by God. For as man was created by clay, jinn were born of smokeless fire, or the hot desert wind. Traditionally, there are five categories of jinn: Jann, Jinn, Shaitan, Ifrit, and Marid.  Jann and Jinn are sometimes interchangeable and is a collective term for various types of jinn. Jinn may be good or evil, except the Shaitan, which are always evil for they are the chief servants of Iblis (think of Iblis as the equivalent of Satan in Christianity). Marids are the most powerful of the jinn.  But not all jinn are evil, and some can be quite good. There are stories of jinn who become Jewish or even Christian and have human spouses and children. Some may even shape change with the most common shape being the snake and the least being the wolf.

The jinn are believed to haunt dark places and desolate locales in the desert. One would think that the Bedouins would be frightened of the jinn, but they are usually thought of as the most knowledgeable and the least afraid of these spirits of the air. One of the most well know jinn stories that I have come across involves the Queen or Mother of all jinn, Aisha Qandisha (there are many spellings for this, I chose one of the most common). She is viewed as the Lilith character in Morocco, giving birth to the jinn. Another famous story is the story of King Solomon from the Old Testament. Not only is it told in occult circles that Solomon used jinn to build his beautiful temple but that the beautiful queen of Sheba was half jinn and that Solomon laid a trap for her in hopes of seeking out her true identity. But the most well-known jinn is the one that most people are familiar with thanks to popular media, Pazuzu. Pazuzu was made famous by the movie the Exorcist, and portrayed as a demon in possession of a young woman. The problem is that Pazuzu isn’t a demon, he is a jinn. He struck terror in the hearts of the city dwellers of Eridu, Ur, Nippur, Uruk, Akkad as well as other cities in ancient Samaria over 6,000 years ago. Pazuzu is first mentioned by the Sumerians and is later identified in Assyrian and Babylonia mythology as the son of Hanpa.

Another type of jinn which is well known in the West is the ghoul or ghoula. These jinn inhabit desolate places such as graveyards or abandoned cities and sustain themselves on human flesh. It is no wonder George Romero didn’t use the word zombie in his original Night of the Living Dead in 1968. Romero used the term ghoul, much more fitting than the shambling hordes that we see on movies and television today.

The stories of jinn have been around for thousands of years and permeate our literature and even our religious texts. Jinn take the place of ghosts in Arab society, and most likely a haunting is not that of a deceased person, but it is that of a jinn. Given the stories that I have heard over the years, I would cross the desert with respect and reverence, and beware the hot desert wind of the jinn.