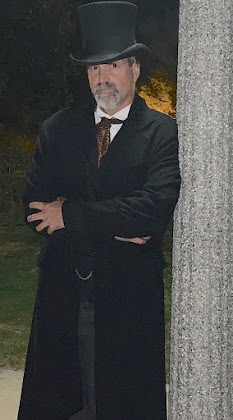 A native of San Diego, Charles Spratley has spent much of his adult life working in museums as well as giving tours, lecturing, and performing. Working for the San Diego History Center and giving historical tours as well as working in archives and then taking a position working at the infamous Whaley House, reported to be one of the most haunted houses in America. It was while doing tours in San Diego, Charles became fascinated with magic and since then it has become a joy and an obsession.

Moving to Orange County he then helped a friend launch Haunted OC where he develops new material and lectures. Charles’ fascination is in weaving the macabre with the wonderous and history. He also has been constantly working on the history of the paranormal and the occult, including the Spiritualism movement and the Victorian séance. Charles is a performer of bizarre magic, which is a style of magic unlike conventional magic where storytelling and word play is the focus and the show becomes an emotional journey.

His lectures at local universities on Victoriana, unusual history and the paranormal are lauded for their content and historical accuracy by professors and are frequently sold out.